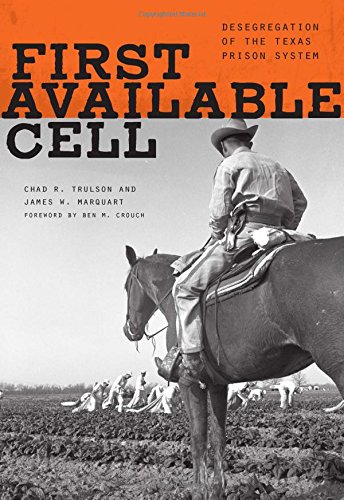 Brand : Brand University Of Texas Press
from USA
to Morocco
in 5-8 days
At your doorstep by Jun 29  to Jul 02 with standard delivery

Decades after the U.S. Supreme Court and certain governmental actions struck down racial segregation in the larger society, American prison administrators still boldly adhered to discriminatory practices. Not until 1975 did legislation prohibit racial segregation and discrimination in Texas prisons. However, vestiges of this practice endured behind prison walls. Charting the transformation from segregation to desegregation in Texas prisons—which resulted in Texas prisons becoming one of the most desegregated places in America—First Available Cell chronicles the pivotal steps in the process, including prison director George J. Beto's 1965 decision to allow inmates of different races to co-exist in the same prison setting, defying Southern norms. The authors also clarify the significant impetus for change that emerged in 1972, when a Texas inmate filed a lawsuit alleging racial segregation and discrimination in the Texas Department of Corrections. Perhaps surprisingly, a multiracial group of prisoners sided with the TDC, fearing that desegregated housing would unleash racial violence. Members of the security staff also feared and predicted severe racial violence. Nearly two decades after the 1972 lawsuit, one vestige of segregation remained in place: the double cell. Revealing the aftermath of racial desegregation within that 9 x 5 foot space, First Available Cell tells the story of one of the greatest social experiments with racial desegregation in American history.
Show More
Reviews

Disclaimer: The price shown above includes all applicable taxes and fees. The information provided above is for reference purposes only. Products may go out of stock and delivery estimates may change at any time. Desertcart does not validate any claims made in the product descriptions above. For additional information, please contact the manufacturer or desertcart customer service. While desertcart makes reasonable efforts to only show products available in your country, some items may be cancelled if they are prohibited for import in Morocco. For more details, please visit our Support Page.